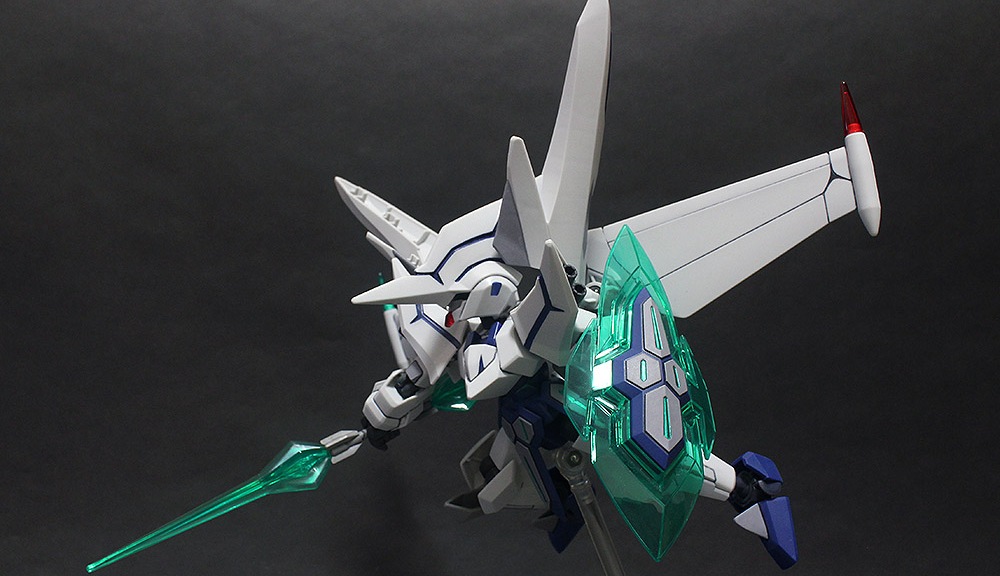 I got this kit over a year ago and only painted it halfway before I had to move across Japan. After that I pretty much stopped messing around with these things for a long time. Recently I decided to finish up this guy and after several weeks of occasional marker painting, here it is.

END_OF_DOCUMENT_TOKEN_TO_BE_REPLACED

I built this kit out of the box shortly after coming to Japan. Never really took proper pictures of it because I wasn’t writing posts on this blog back then and conveniently forgot about it until recently.

END_OF_DOCUMENT_TOKEN_TO_BE_REPLACED

Here’s a quick review for the Hyper Function LBX Achilles Deed. I built it straight out the box without painting or applying any stickers. It has many parts from the original Achilles which I didn’t manage to paint or review last year.

END_OF_DOCUMENT_TOKEN_TO_BE_REPLACED 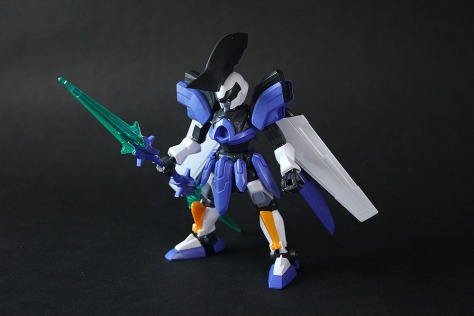 END_OF_DOCUMENT_TOKEN_TO_BE_REPLACED

Haven’t had one in a long time so here it is. This guy and the RG Exia came out yesterday. Was contemplating whether to get both but since most of my collection back home is 1/100 scale I went for this instead. Compared to other non-Hyper Function kits I’m expecting this guy to be no-paint-friendly, but I actually have a backlog of LBXes to paint with markers so maybe I might let this guy jump the queue.

Still I hope this line can continue and throw out some more popular designs.

Seeing how Bandai might be giving up on their awesome Hyper Function line by skipping Odin I decided to not to wait and just get the existing kits of whatever I wanted before they got discontinued instead of hoping for HF renditions. No WIP as I don’t have my airbrush with me.

END_OF_DOCUMENT_TOKEN_TO_BE_REPLACED

Yes, you’ve read this right. This post marks my ‘retirement’ as I move to Japan this Saturday night. I barely managed to finish the Sazabi through a frantic rushed job while trying to sort out my belongings. It also means that my Joker will unfortunately be left unfinished. When you read this post my computer will most likely have already been disassembled and making its way to my new place. I’ll have to try to survive without it for at least two weeks, and I still need to sort out internet connectivity when I get there.

On to the subject proper; this might be a fairly long post as I try to sum up everything that happened since my last WIP update till its eventual completion. The photos were rushed and I did not have time to post this guy. I had to use a tripod as it was dusk and I still don’t have sufficient lighting in my room to take decent photos. 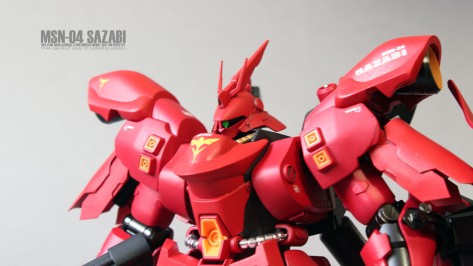 END_OF_DOCUMENT_TOKEN_TO_BE_REPLACED

I’ve been really busy these few weeks and missed out last week’s update. I mentioned previously that I am reaching the end of this blog’s life as I will be moving to Japan for work. The really worrying thing right now which I never really announced is that I will be flying off at the end of this month, and all my models are still in the lurch. My company wasn’t really committed to finalising the details so I was really hoping for some kind of delay but everything went according to schedule. My progress on the Sazabi has been slow all this while even though I seem to be spending quite a bit of time on it. On the other hand I’m getting less free time by the day. I used to have to only work for half a day (just studying Japanese) but I’m reluctantly bidding farewell to my free half days off now.

I started working on the legs a few weeks ago but my motivation was totally killed when I realised I still had to do lots of epoxy work so I turned to the Joker. Unfortunately with so little time left I might not be able to finish painting it before I fly. For the legs of this guy I added some pla-plate to the shins but the shape of the lower legs meant that it was impossible to just bend more sheet styrene and glue them on ie. it’s epoxy or nothing. I initially thought the last of my epoxy could be used on the thighs but I had to go buy a new pack. I’m still in disbelief that I used up a whole pack of epoxy in such a short time.

Of course, there was lots of sanding and multiple rounds of adding on more epoxy to finally get the shape I wanted. With exactly one week left before I was to fly off I decided to finally stop messing with this guy as I did not want to leave it unfinished for the next two years or so while I’m overseas. This is a pic I took at 3am on Saturday night. There isn’t much in terms of surface details so it still looks like a run-of-the-mill HG kit. Now I will have to rush through the painting and all the remaining steps. And I still haven’t started packing my stuff for the move. I am so not prepared right now. Oh dear.

I initially decided to do an OOB build for the Joker considering how deep a hole I dug myself into when working on the Sazabi but its flaws were just too glaring for me to ignore. When I got tired of messing with the Saz I decided to mutilate this guy and see if I could make it a little bit better.

Here’s a picture of the offending hip joint which I talked about previously. Like the other Strider Frame models the position of the hip ball severely restricts the articulation range of the legs. On my Joker the thigh cups are also incredibly loose so the legs fall off without effort. The knee is also unable to straighten completely so neutral standing poses look a bit weird. 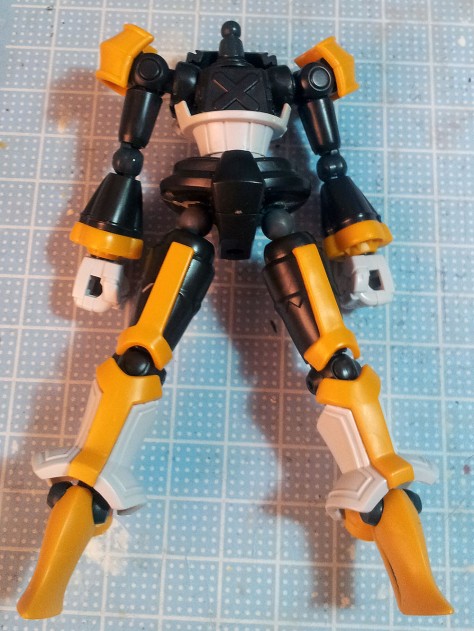 I removed the existing hip joint polycap and replaced it using the leftover polycaps from the Elysion and a pair of aftermarket ball-shaped double joints. This was a really slipshod job as I didn’t make any plans to implement the joints properly beforehand. The double joints peg into the hips and are halfway inside the existing thigh cups revealing the ball shapes at the hips. They look a bit odd but the trade-off is that they offer a much wider range of motion now. I also trimmed a little bit of material from the insides of the knees so that the legs can now straighten completely. 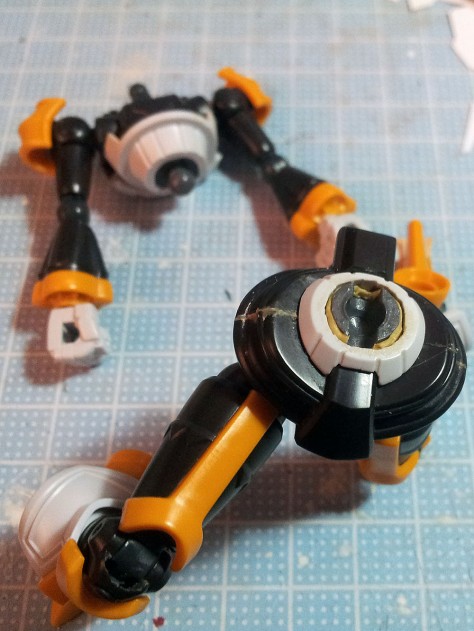 I also decided to increase the range of motion for the waist joint by replacing the existing peg with a ball joint. This was done clumsily though – I gouged out material from the white lower waist piece and widened the existing hole recklessly so now it looks unsightly. I can patch up the mess completely if I leave the white bit permanently attached to the hips but it might be troublesome to paint later on. The peg in the torso has been replaced with a ball. As you can see in the picture it’s now possible to make the Joker assume a kneeling position.

Lastly I filled the hollow areas behind the Joker’s headdress, and made some slight changes to the chest. It’s pretty much ready to be painted now, and I’m thinking of painting it in the original colours. And now back to the mess that is the Sazabi…

I was really busy the past weekend and didn’t manage to upload a post on time. I got stuck in a rut while working on the Sazabi and decided to start on something else while thinking about it. Despite the amount of work required to get these little things to look decent I still went ahead and got the Joker as I liked its design. Here’s a quick snapfit of the thing. 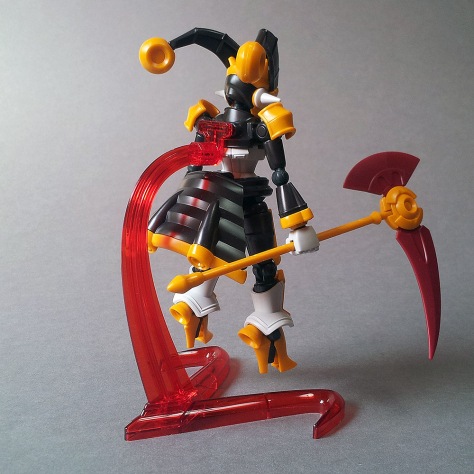 It’s from the first season of the anime and it has some issues, most of which are characteristic of the Strider Frame, the in-game name for this type of fast-hitting, lightly armoured character. The joints, especially those on the legs, are really loose. The legs themselves are prone to falling off the hip joints, which are also strangely designed, making it impossible to bring the legs together, or even spread them apart. I decided to rework the hip joints and improve the existing waist joint, but it took a bit of time before I could get everything fixed up and working, which I’ll post for the next WIP update.