It’s been a while since I last posted something on this blog; over a month, in fact, and I can see the viewership statistics on my dashboard steadily dropping.

Well I’m back to the days of school again, and I don’t have much free time to think of ideas and spend hours doing 4komas, not to mention build any gunpla. Sorry about that. If you’re expecting toy reviews, I kinda hope I can dig up some free time for when I lay my hands on some stuff, and with the crazy amount of preorders I’ve gotten myself into, I’m pretty broke now.

Anyway I should stop delaying the good stuff – I just got home from this year’s Gundam Fiesta 2010, held at the same faraway Compass Point as last year. Enjoy the 168 photos ahead. Just a word of caution – there were no Gundam cosplaying ladies this time round as I went on a Monday morning. 😛 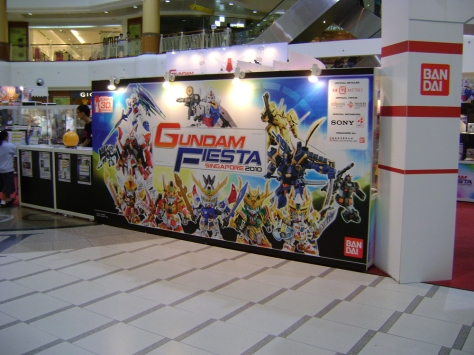 END_OF_DOCUMENT_TOKEN_TO_BE_REPLACED

I just got home from the first day of Anime Festival Asia 2009 and here are the photos I’ve taken. First things first, this year’s event has been way more commercialized than the last with booths selling stuff everywhere and tons and tons more people. Cosplayers were also larger in number and dispersed randomly making it hard to take photos when you’re trying to do it among the crowds and the SLR-equipped folks. Nonetheless there are 132 images in the link below, so enjoy and please forgive me for some of the sloppy hit-and-run shots. As with my previous event coverage, click on the images for larger-resolution versions.

What I really hate about WordPress is how you have to manually insert every single photograph into an entry despite having bulk upload capability. I’m glad I churned out a little piece of code in MATLAB to help me automate this during the time it took to upload the photos muahahaha one thing from school that’s useful.

So besides the heavy commercialization and crazy crowds, I also forgot about Danny Choo’s appearance on stage. I did catch the last few minutes of his talk though. After that I was camping out at the concert venue with some of my party members to leech some music but got chased out by the organisers in the afternoon. So being dissatisfied that I forked out SGD$20 for a pretty unsatisfying day I roamed around to see if I could at least buy something from the event.

I hate to say it but you really get to see a lot of stereotyped “otakus” around – the kind that put people off or even in rare cases disgust them. Of course, it’s not as extreme as the OMG HUNCHED FAT SLR-EQUIPPED SCARY LOOKING FAT DUDE PHOTOSHOPPED WITH SPECIAL FORCES picture but it’s getting there. You also realise that because of their lifestyle, some of these folks have developed many interesting social behaviour patterns, one of my favourite being decreased social inhibition. I’m not saying it’s bad to be forthcoming in a largely reserved, inconsiderate and apathetic society that most Singaporeans belong to, but if someone whom a layman would stereotype as being an otaku (given today’s trends and everyone using the word) went up to a complete stranger and his/her party and joined their conversation in such a “forthcoming” way, the stranger would be creeped out. No wonder these people get such a bad name.

Later in the evening there was a line for the public audience to view the concert but it grew so long so my party gave up and had dinner instead.

END_OF_DOCUMENT_TOKEN_TO_BE_REPLACED 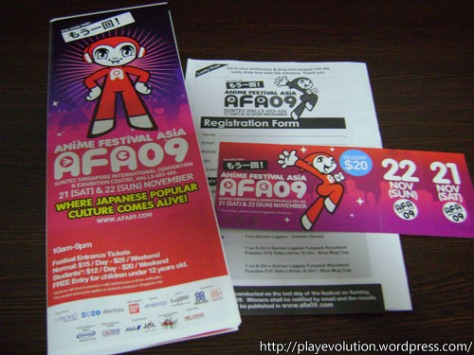 This event is currently held in Singapore from 2 – 14 September. I thought I would be missing out on it since school took up all my free time. Today I had a pretty useless make-up lecture in the afternoon and decided to just go take a peek there when it ended. I didn’t expect to get anything since I’m now a student and not paying taxes to the government, and most of the event-limited stuff would probably be sold out long ago.

Indeed, I left without buying anything. Tons of people were snapping up the limited edition kits and the MG Sinanju. I wish I had some dough.

Warning: very long article – 166 photos ahead! Click on them for larger-sized ones! You know you want to once you go all the way down the article 😉

END_OF_DOCUMENT_TOKEN_TO_BE_REPLACED

I was lucky to go for this event for a short while with a few friends and I snapped a few miserable-looking photos. Nonetheless I’ll still post them up here. You can see them posing with the cosplayers and stuff. By the way, I left the place with a 1/100 00 Gundam GET!!

edit: Re-uploaded the pictures to include captions and stuff. Am currently being annoyed by WordPress appending 1’s and 2’s to my pictures.