I actually have another one of this back home many years ago but it was broken and super-glued in numerous areas. That said, I managed to break this one again when trying to assemble it. 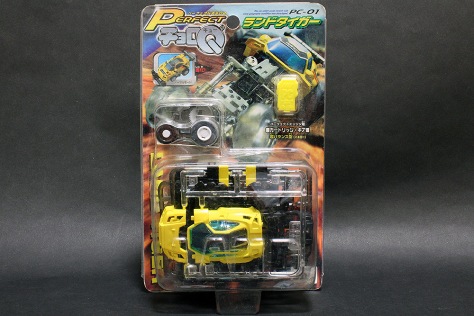 Package. I was worried that the toy itself would be ready to crumble into pieces due to the transparent packaging exposing the ABS plastic to light over the years.

At first glance things do look in good condition. 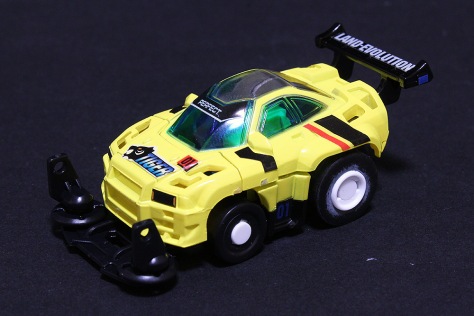 The car itself is a colour variation of Marine Shark, Sky Eagle and Braking Bison and you also get the yellow balanced Cartridge Gears. 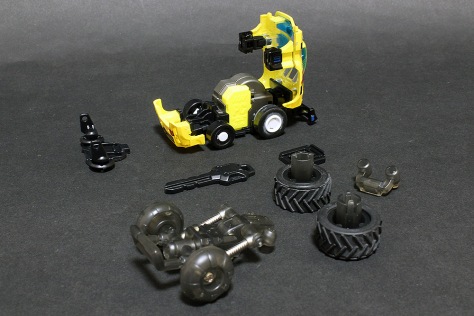 You get to assemble the front suspension unit which is fun but the parts are too fragile for their own good. Once again due to the runner design to reduce manufacturing costs, structural elements like the front wheel axles and front swivel are all on tiny pins. I broke one of the front wheel pins trying to push the wheel hub/peg cover to secure the left wheel. In the meantime I used a screw and washer to hold things together.

Perfect Mode. The front suspension unit has two springs that act as a single one to allow the front wheels to hinge upwards. The front wheels themselves can also swivel freely. Unfortunately the rear wheels only get large treaded tyres.

Honestly this mode is purely for looks as there is barely any usable suspension travel because the front bit that allows the front suspension unit to mount to the car is nearly touching the ground. Like the wheels, the front axle swivel is also on a tiny pin, while the front bumper may snap off if it goes head-on into an obstacle. 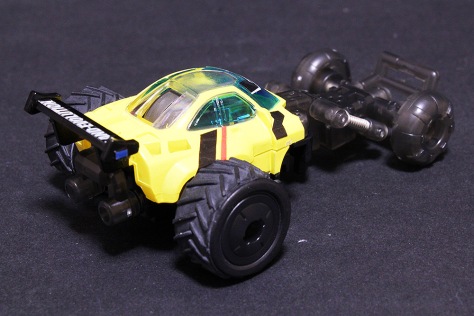 There is a small stopper attached to the back to keep the car body closed.

Really a display piece in actuality, I imagine many kids like my brother and I were disappointed at how fragile these tiny toys were when we took them out to run on grass and dirt.

I fixed the broken front wheel axle by making a 2mm hole where the pin broke and inserted a brass rod as a replacement pin, while enlarging the peg hole slightly in the wheel hub cover. The same thing can also be performed on the other load-bearing elements on the front suspension unit.